Suba, a 23-year-old international relations student from outside Kuala Lumpur, didn’t grow up in a household that talked about politics, but over the years his interest in government has grown. Suba will soon become one of millions of people voting for the first time after the south-east Asian country lowered the voting age from 21 to 18.

“I’m anxious,” he says. “I feel the absolute need to vote and I do understand my vote is significant and valuable … but will it change the status quo?”

Malaysians head to the polls in November wearied by years of political instability and worried about the economy. The youth vote is attracting new attention after constitutional changes to lower the age and automatically register voters. Those reforms have led to the number of voters swelling by about 6 million people since the last general election, in 2018. People under 40 are now the largest voting cohort.

Tharma Pillai, co-founder of advocacy group Undi18 which campaigned to give 18-year-olds the vote, describes it as a “huge change to Malaysian democracy”.

“For the first time, the youth are the biggest electoral bloc,” Pillai says.

While they bring huge weight in numbers, questions remain about whether this group holds values distinctive enough to prompt political change, and whether they will turn out at all.

No single party in Malaysia has ever formed a government on its own. The main coalitions vying to form government are Barisan Nasional, the current ruling coalition led by the Umno party, Pakatan Harapan and Perikatan Nasional.

Prime minister Ismail Sabri Yaakob called snap elections in October to strengthen Umno’s mandate in a rocky political landscape that has persisted since the multi-billion dollar 1MDB scandal. A wave of public anger over the 1MDB saga led to the defeat of Umno in 2018, ending its 61-year rule of the country. But the alliance collapsed, Umno formed a coalition and returned to power. Former prime minister Najib Razak, who was jailed on charges linked to 1MDB, remains a powerful figure in the party. Another ex-leader, 97-year-old Mahathir Mohamad, who fell out with Umno over 1MDB, will defend his seat and has warned a win by the ruling party could see Najib pardoned and let off the hook.

Malaysians are frustrated after years of instability. Voters are also grappling with rising living costs as the economy, still recovering from the Covid pandemic, and dealing with a global slowdown and inflation pressures.

Ibrahim Suffian, pollster and co-founder of the Merdeka Center, says inflation and political stability are the top issues in voters’ minds. Suffian says the general mood in Malaysia is “fairly negative” and polling conducted in July found nearly two-thirds of respondents thought the country was heading in the wrong direction.

Economic concerns made up a big part of the dissatisfaction, while continued political uncertainty also troubled voters. For young people, jobs and the economy are the main concerns. Youth unemployment is high, many graduates struggle to find jobs and wage growth has been stagnant. Pillai, who works in youth advocacy, agrees this group will look for a candidate who will “make their lives better economically”.

‘I am hopeful … but pragmatic as well’

Still, it is not clear if Malaysia’s young people will show up to vote.

Andrea Chow, 19-year-old from Selangor state on the county’s west coast is another new voter. Like Suba, she describes feeling anxious and excited about casting her first ballot. Chow is involved in political activism but says her friends aren’t particularly enthusiastic about the election.

“My peers who are not as politically engaged, they are not as excited. They have this belief that even if they vote, their vote doesn’t matter because of the instability,” Chow says, adding as a result, they are not sure if they’ll turn out.

Pillai reflects this sentiment, saying a lack of faith in political parties has made it “challenging” to inspire young voters. At the same time, he says young Malaysians tend to share party affiliation with older generations and their beliefs are often not different to those held by their elders.

“Unlike in the west where young people tend to be more progressive, I don’t think that’s necessarily the case in Malaysia,” Pillai says. 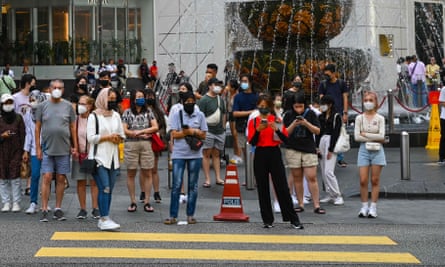 Malaysia will hold a general election on 19 November. For the first time, the majority of Malaysian voters will be under 40 years old. Photograph: Mohd Rasfan/AFP/Getty Images

As the general election draws closer, Professor William Case, head of politics, history and international relations at the University of Nottingham’s Malaysia campus, argues unless the attitudes and political outlooks held by young people change dramatically between now and the election, they are unlikely to have a “distinctive impact”.

“There’s a lot of uncertainty,” says Case. “This massive influx of young people will increase the size of the electorate but not significantly change the outcomes.”

James Chin, professor of Asian Studies at the University of Tasmania, says it will come down to turnout. If young Malaysians show up in large numbers and back the opposition, there could be regime change.

“If [young voters] come out at 40% to 50% they will have no impact,” Chin says. But he says if turnout is high, between 80% and 90%, and if almost all of that group vote for the opposition “then the current government will fall”.

Suba remains excited about his first trip to the polling booth and appreciates the reform that has opened the door to younger voters.

“In the long term it’s one of the best initiatives that has been taken … very much appreciated and [I’m] really glad that they [lowered] the voting age,” he says.

But he agrees young people are unlikely to trigger a seismic shift in Malaysian politics.

“Certainly I am kind of hopeful but at the same time I am pragmatic as well,” he says.