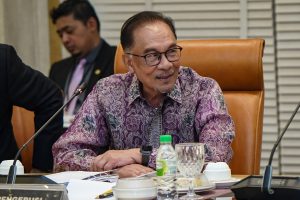 Malaysian Prime Minister Anwar Ibrahim chairs a meeting of the National Action Council on Cost of Living at the Perdana Putra in Putrajaya, Malaysia, November 27, 2022.

Malaysia’s new government plans to review the country’s elaborate system of government subsidies program in order to ensure that the support goes to those most in need, Prime Minister Anwar Ibrahim said yesterday, in one of the first policy-related comments since his appointment.

Speaking at a news conference, Anwar said that he had given the National Action Council on Cost of Living (NACCOL) two weeks to analyze the subsidy system and the implications of narrowing some of the benefits.

NACCOL coordinates Malaysia’s system of cost-of-living subsidies, which includes support to keep down the cost of basic goods such as fuel, cooking oil, sugar, flour, and electricity. But Anwar said that some government subsidies, such as help with electricity costs, are currently benefiting all segments of society, rather than just low-income Malaysians.

“The provision of subsidies to the people should be implemented in a targeted manner to ensure it is enjoyed by the groups that deserve it,” Anwar said, the New Straits Times reported. “I have no problem with subsidies for the people, especially those who are in need, but these subsidies should be targeted.” He said that the purpose of such support was “to ease the burden of the poor and of course the rich and the industry should not be enjoying it.”

Get briefed on the story of the week, and developing stories to watch across the Asia-Pacific.

On November 25, the day after he was sworn in as Malaysia’s 10th prime minister, capping off a circuitous, decades-long political odyssey, Anwar said that his primary focus would be on the cost of living, given the country’s stagnating economy and polarized political landscape.

The focus on rice-bowl issues is a prudent move for Anwar, given the complex and ethnically polarized landscape that emerged from last week’s general election. As I noted last week, the other major development of the election, aside from Anwar’s appointment as PM, was the rise of the Islamic party PAS, which now holds the largest number of parliamentary seats – 49 – for any party.

Tackling concrete cost-of-living challenges, which cut across ethnic and religious lines, is a good way of winning broad support for his multi-ethnic Pakatan Harapan coalition, and defusing claims that it is seeking to undermine Malay privileges.

This focus on living standards is part of Anwar’s broader attempt to contrast himself and his government with the corruption and glad-handing of the country’s incumbent Malay political elite. As Bridget Welsh of the University of Nottingham Asia Research Institute Malaysia in Kuala Lumpur argued in an article on Saturday, this was at least partly to explain for the electoral whimper given by the United Malays National Organization (UMNO) and its Barisan Nasional coalition. In particular, Welsh referenced the role of UMNO President Ahmad Zahid Hamidi, who “embodied” popular concerns about corruption due to the series of ongoing criminal cases against him. This followed the party’s defeat at the general election of 2018, largely due to the gargantuan 1MDB corruption scandal, which has since landed former Prime Minister Najib Razak in prison.

In order further to distinguish himself from this wealth, Anwar has also refused to take a salary as prime minister. In a press conference on November 25, he said that the new government’s first step should restore the confidence of the people, “so that they don’t see ministers and leaders regardless of political party and religion who think about salaries, contracts, and shares.”

I receive harsh criticism, death threat, go out of business due...